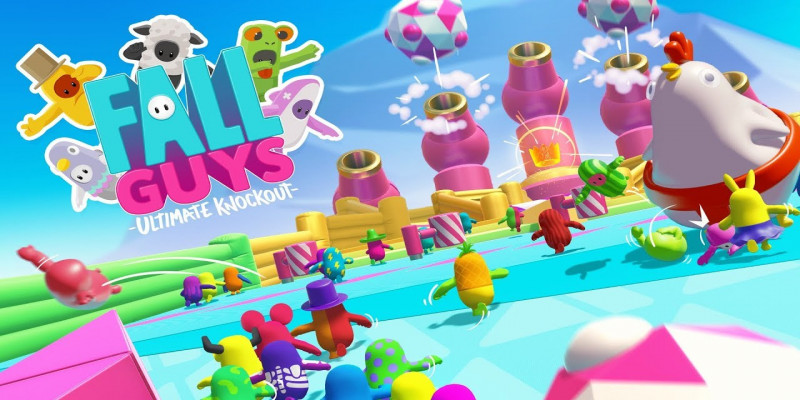 Fall Guys: Ultimate Knockout is an ultimate battle royale game by Mediatonic and Devolver Digital, and you may be looking for similar titles after enjoying its unique gameplay. Actually, there’s no game that combines battle royale madness with fun platformer features and welcoming cute casualness in a similar way. On the other hand, the list of wild party games doesn’t end on Fall Guys. Here is our selection of Fall Guys alternatives, which fans of Fall Guys PC should check out.

This January release combines 2D sidescrolling mechanics with battle royale. 50 colorful comrades traverse a large 2D arena and gather items on their way to survive and take out as many other players as possible. It’s a funny battle royale experience with rather challenging gameplay.

This game is an absolute leader of the battle royale universe. Even though the growth of the game’s player base is not as fast as it used to be, it’s still one of the biggest and craziest games in the genre. Each match in Fortnite involves 100 players who land on a large island from a flying Battle Bus and struggle to survive while shooting each other. The unique feature lets you build quick fortifications to protect your character and block other players. For even more fun, you can team up with up to 3 friends.

Do you like solving puzzles along with performing goofy stunts and parkour? Human Fall Flat offers hilarious gameplay that can compete with Fall Guys, but it doesn’t push you into the competition. The game presents a mix of funny short levels with some tricky challenges that take up to 30 minutes to complete. You play blobby buddies who can solve tasks alone or collaborate to speed up the process.

Similarly to Fortnite, you can build structures in Ultimate Chicken Horse, by the whole action is wrapped into a slick 2D platforming level design. You can team up with other players to build complicated obstacle courses and challenge yourself by attempting to go through them. The title combines the cuteness of animal characters with hardcore level design, which makes it a hilarious and challenging tile at the same time.

Want more fights between funny characters? Gang Beasts is our favorite amongst the Fall Guys alternatives. It’s not battle royale, but you still can play silly blobby characters to fight other players. The gameplay is just ridiculous as the buddies are almost uncontrollable, and they usually spawn on absurd locations where it’s easier to fall than to kick your opponent. Clumsy visuals and unresponsive controls make Gang Beasts one of the most exciting party titles.

Now you have a bunch of alternative games to have booming game parties with your friends online. It’s a perfect way to blow off some steam and socialize during the lockdown. Which of the 5 games above are you going to play tonight? If you know other cool games like Fall Guys for PC, join the chat in the comments and share the article with friends to choose a game to play together.